A Take Over Bid

River had just come running in with the wind in her hair. She jumped right up at Stay daddy looking in a right panic.

Now I'm used to her exuberance so her coming running in hair and ears flying behind her is not so much of a surprise but this was different so I went out the back to see what it was that seemed to have spooked her.

There at the back of the garden on the shed was a massive and when I saw massive I mean MASSIVE black cat with a flash of white on it's nose staring right back. 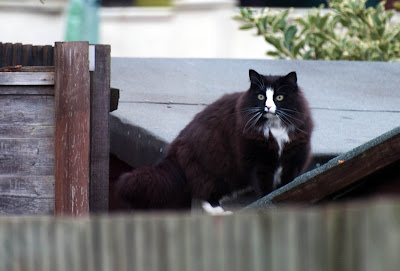 Now I'm getting used to strangers popping up around here recently.

First of all a few weeks ago there was that blackcat that looked like Evie, doublay. Then there's Spit that's been coming around but at least those two didn't have an air of menace about them. 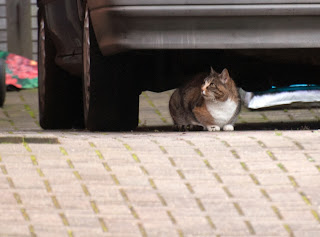 There's something in my catty powers that's telling me something isn't right here. I think there's a rival group making a move on in. A take over bid is beginning for Catworld.

Right I can see Emma over the road, I'm going to get her attention so that she can pass this information on over to Mogsie. We need to call a cat council.