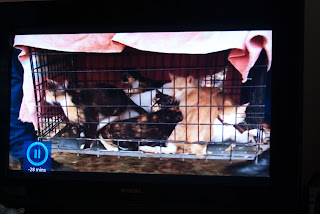 The daddies like to watch a lot of programmes about cats and dogs and dinosaurs and dragons.

We've just watched one about giant spiders the size of humans heads who the man on the TV said if they were alive today they would eat cats. Well thank the universe they're not. I would not enjoy that.

The second programme was more upsetting. It was about a lady in Australia who had 71 cats in her house. 71! Way too many.

The man on the TV said that she had been ill and they just kept on breeding because she wasn't able to look after them properly. Oh the house was a complete mess. Those poor cats.

They took 70 of them away and just left her with one. Somehow a miracle happened and they were all OK and found new homes to go to.

I know she was ill but why let it get to that state. Daddy said that when he was a little boy there was a lady that lived near him who ended up having 40 dogs in her house. The RSPCA came in and took them all away.

Why do people let these things get out of hand? Lovely that they love us animals but it's not fair on us to have some many in such a small space together.