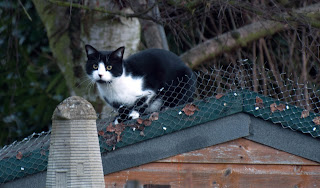 I spotted Bella out on the shed roof and the coast was clear so I ran out to see how she was after yesterdays harassment by Spit.

She was really surprised and asked did I not see what happened last night?

No I hadn't seen anything I had been cuddled up with Stay daddy on the sofa and the blinds were down and windows were shut as although the snow had stopped and melted it was really cold.

There had been a great big bundle out the front!

Mogsie and George had confronted Spit over his actions and to try and find out why he bothering the cats over here.

Well it all turned into a bit of a scrap. In the end R had to come out and separate them all. Apparently it had gone on for ages. Each time they were separated one or the other of them started it up again.

She and Sarah came out to try and calm things down but were unsuccessful and in the end when R walked over the road right into the middle of it they all dispersed.

I guess we'll all have to sit and wait what happens now. Hopefully the message has been gotten across. Mess with one of us, mess with us all.