What Goldfish Think About 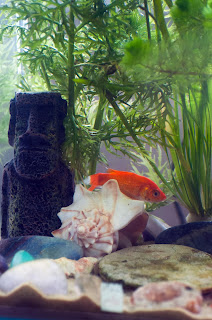 I was just sitting here watching Alo and a thought came to my mind.

I wonder what goldfish think about?

Well that led me onto doing some research.

I didn't stumble across the answer straight away. I did find out during my research that scientists have found out that goldfish do feel pain. Well of course they do, just because they are a fish who would ever think that they didn't hurt just like the rest of us?

The second thing I discovered was that contrary to popular belief they do have a longer than 3 or 30 second memory.

Now this was news to me!

I'd fallen for that old wives tale like many people have. How was this discovered?

Well some boy in Australia did an experiment with his one where he flashed a beacon light 30 seconds before feeding him for a while so that his fish got to recognise that when the light flashed and food was to come and swam over to his feeding point.

Well that at least proved the 30 second rule but even more interesting he then turned it off for a few days.

When he started up his experiment again the fish immediately came to the spot that his food was delivered proving that the memory can last at least for days.

I didn't get any definitive answer to everything that they think about but they definitely think about food.
at 18:43