So That's What Had Been Going On - The Set Up Revealed 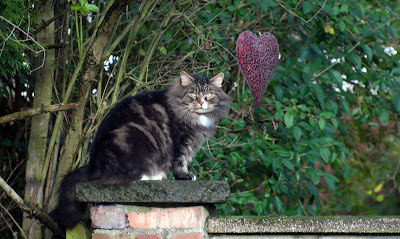 I saw Mogsie sitting deep in thought up by The Swinging Heart of Love. This was my chance to find out what's been going on so up I went.

He told me that he, George, Bella and the lighter Naughty Twin had all gone undercover following on from the attempted take over by The New Cat Crew.

They knew something was in the works and they wanted to draw them out in the open, get them to make their move. Show their hand. Hence George walking calmly away from his brunch bowl the other day.

It was all a part of their plan!

Well I just had to grin to myself. I never had a clue and I know them all well. If I hadn't a clue then there's no way that Chameleon and the others would have known!

Go on, I said, I was waiting for the next part of the plan to be revealed to me. I felt very excited to hear what was coming next.

He had been watching from a slight distance for his chance to go into their camp and this was it. As The New Cat Crew made their move, Catworld was making theirs.

It had all been a set up! Clever.

As Flash, Spit & Chameleon were attempting their coup in Catworld, George went and watched Doublay to make sure that he didn't come back to their camp.

Doublay was still acting as the scout but  Bella had been set up as a decoy, acting all suspicious like she was trying to find their camp. She was near their area but at this point was circling all around, not going too near to distract him.

So Flash, Spit and Chameleon were in different locations in Catworld, thinking there take over bid had been uncontested.. Mogsie was in The New Cat Crew camp searching for information. Bella was being watched by Doublay, who was being watched by George and they were all on a wild goose chase and the lighter Naughty Twin was positioned between George and Mogsie poised to take messages if required.

Oh this was fabulous news to me.

What happened next? I asked Mogsie, getting increasingly excited to find out what he had found out.

Mogsie searched their camp picking up all their smells. There was only the four scents so we know knew that there wasn't any other member that hadn't revealed themselves. Information, as Mogsie said, is power!

He went around to see if he could find out any information from any of the other cats in their land and came across a big Ginger cat who said that he knew of them.

The Ginger cat said that he had once nearly been recruited into their gang. They had asked him to come over to Catworld as an initial scout to find out what it was like here on the pretence that they wanted to make friends.

At first the Ginger cat said that he went along with it as Flash especially had come across as very charming and was offering all sorts of fun and tipbits.

He said he came over and saw that we were all a pretty much happy bunch and he didn't feel it was right to disturb us. When he said this all back to Flash apparently a great big fight occurred. Flash was furious, he though that he had control over Ginger cat but he wanted no part in it. It was at that point that he'd decided that he wasn't going to be a part of anything like that.

His standing up to Flash had thrown him. Ginger cat said that there was no way that he was going to be driven out from his own area and they'd tensely co-existed in the same area ever since.

Ginger cat confirmed that Flash was the groups General, Doublay was the Scout, Chameleon was the Muscle.

Ginger cat said that out of the group Spit was the one who most baffled him. He definitely didn't agree with everything that Flash was trying to do. A couple of times he'd stood up to Flash who although he was the General wasn't actually the physically strongest. He used his fierce looks and size to intimidate but Chameleon was definitely the one who stepped in when a beating was required to keep anyone under control.

Mogsie asked Ginger cat outright if he could be trusted and if he thought Spit really wanted to leave the group.

He said that out of the four of them he was the one who he found most palatable but that there was such a twisted-ness with the control that went on with the group that he personally wouldn't trust any of them.

With that Mogsie said that he thanked Ginger cat and extended a welcome to him whenever he wanted to come over.

He let the lighter Naughty Twin know it was time for them to come home who quickly got the message to Bella and George.

They had just got home yesterday when I saw Mogsie and the lighter Naughty Twin under R's car. Mogsie was filling him in.

I wanted to ask what was next but River and Twevor came running out and we both ran off. Oh this all really is very exciting information. I'll try and catch him again later.