Catworld Has Decided To Set A Trap. A Honey Trap! 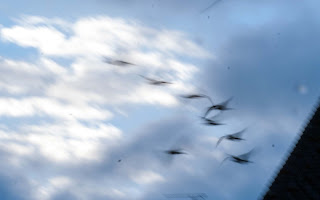 Well when I got up this morning I didn't realise just what a morning it was going to be.

Word has spread everywhere after Foxy's rampage through Catworld and the surrounding districts. Even the Gooses From The Lake flew over to see the devastation. Word has spread that far!

Sarah came out to investigate the mess and obviously reported back straight away and an emergency Cat Council meeting was called.

I didn't go as I wasn't told in time but in such states of emergency a quick plan of action is required.

The lighter Naughty Twin popped by to give me an update and oh the joy of such a solution.
Catworld has decided to set a trap!

The lighter Naughty Twin said that there it was a very heated debate. Everyones gander was up. We cats are naturally clean animals and this mess and the continuing threats just cannot be tolerated. 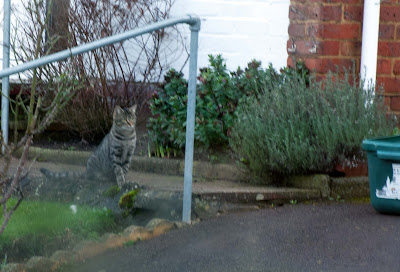 The plan, to set a honey trap and defeat our foes with one stone.

Mogsie has gone to inform Ginger Cat so he can warn any of the inhabitants of his area that are not members of the New Cat Crew to stay well clear.

We're all to start hording tip bits of food and treats so that we can get a great big pile to tempt both Foxy and the New Cat Crew. It's worth giving up some treats if this is to solve the problem.

This food will then be moved under the cover of darkness to the tunnel at the end of the road. a place Foxy is known to go to.

The darker Naughty Twin is then going to let slip to Spit that there's problems within Catworld and that some members are ready to break free and that they are storing food in preparation for a revolution.

We're going to give a false date and the lighter Naughty Twin is going to keep watch on the area. If the NCC turns up then we know that Spit is not to be trusted. If they don't turn up then he can be and we'll inform him that the date was changed last minute because things were not ready in time.

We'll later tell him everything and why we did this. Us cats believe in honesty but sometimes you need to just make things sure and if he doesn't understand well there's not a lot we can do about that. Hopefully the fact that we're then helping him to escape will be enough for him.

The darker Naughty Twin will then let it slip to Chameleon who we know is trying to court him and of course will inform the rest of his gang.

The day that we really will plant the food Craig, the Squirrels and the Birds have agreed to  spread the word that there is a store of food, so wind of it gets to Foxy to lure him there as well.

The plan is not to get the New Cat Crew harmed, just scared witless and either they will run away and leave us alone OR we will tell them it was us and they will know we are not to be messed with.

We know they won't go down without fighting to hopefully it will also scare Foxy off, a whole gang of cats banded together ready to fight him.

Spit if innocent can be freed from their grip and we can all get on with our normal, generally peaceful lives.

I for one loved the idea. It seems like a win-win plan although of course not without it's risks.

We need a couple of days to get a store of food ready so we're aiming for the weekend to pull this scheme off.