We just had a perfect moment. 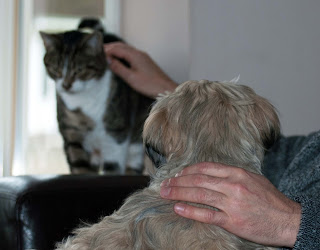 This morning everyone slept in it turned out to be a late night last night. We were all up watching late night TV. They had gone over to see the girls they slowly filled me in on the activities of the evening.

River apparently was very good and I must admit although we both woke up earlier than the daddies she played with her bedroom toys without incident and was pretty quiet around me. We both woke up in our own time.

When Stay got up he took River downstairs and I followed with Disappears a few minutes later.

It's a Sunday therefore its a quiet slow start. It's the same every Sunday the best way to start even if today it's is a bit later than normal.

The reflection time I had yesterday seems to have chilled me a bit and it's looking like Rivers day out has done the same for her. She ate her brunch, brought a bit of the Waterfall of Gold tree in and then flopped on daddies lap looking at me.

I'd felt really drawn to being with everyone and as it seemed River was also in a still mood I'd moved right next to them. We spent nearly 15 minutes settling down daddy stroking both of us. It was lovely and after a few minutes I said hello to her.

I think it surprised her as she just stared back without trying anything on. It really was a perfect moment.