I thought Doublay was hanging out on the less that sunny Sunshine shed today but it turned out not to be him at all. 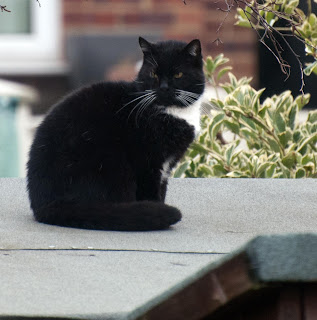 George was up there having a clean and a bit of a stretch.

I've been doing a fair amount of thinking since he called me brave Lil' yesterday.

Mogsie and George have both called me brave recently. The only thing that I can think that either of them are referring to is when I jumped in front of Foxy Lectar the other week and then stood up to Flash and Chameleon.

It must be what they are referring to but there was only one set of eyes that I had seen.

I know living with River can be a test but they can't be referring to that, I wouldn't call it being brave.

I'm coming around to softening up to George and Mogsie again. It's taken a little while to let go of everything that's happened with the love quadrangle and I think it's taken them even less time to let go of their own little love triangle by the looks of it.

Daddy said Mercury has gone retrograde today. I'd no idea what he was talking about but apparently it's a good time to go back to deal with things that have previously been started but not yet fully resolved. Not a good time to start anything new though.