The Cat Courtship Dance Has Begun!

Ah tis' the season to be frisky I see. Yes you can tell Spring is on it's way the Cat Courtship Dance has begun!

That would explain all the inappropriate behaviour going on this past few weeks. It's just come to me, the answer all courtesy of George.

He's out the front making a right show of himself. All rolling around showing me his belly. Like he thinks that would impress me. He's gotta work a lot harder than that and he's got such a terrible weepy eye.

Go get it sorted!

If he lets his eye get into such a state goodness only knows about his other personal habits.

Still at least he's putting in some effort. Put a bit of a smile on my face I will admit. 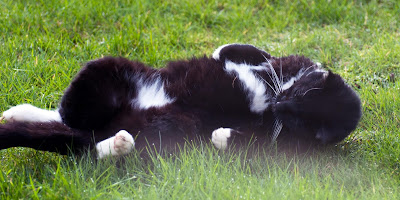