That's When I Spotted Him, Flash Was Back! 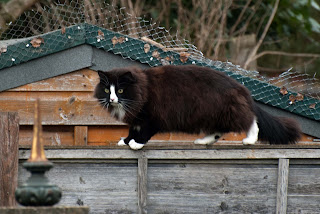 Well it was nice while it lasted but River just can't help herself. I could see she was ready to try to lick me or something so I removed myself from the moment being spoilt and went up to see if any Dreamies had been left for me on the table.

River followed but much to my surprise she ran straight outside and started chasing her own tale. Always stumps me that one I just cannot see why she finds it so funny but each to their own I guess.

That's when I spotted him, Flash was back! 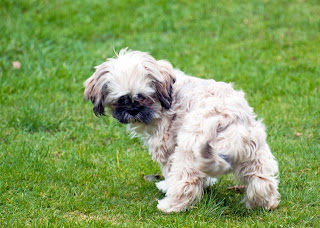 I froze, my heart began to pump a little faster. I was inside so I knew there was enough distance between us for me not to feel like I needed to react instantly. At the same time I needed to make sure River wasn't under threat, she was paying no attention at all.

Flash was creeping along the back wall in a very sly way.

Since the events of the first weekend this month neither Flash nor Chameleon had been seen. There's been a few sighting of Doublay and more recently of Spit since they defected from the New Cat Crew but other than that nada.

No one's mentioned anything that happened that night however I'm sure Mogsie knows more than he's letting on.

I watched  Flash as he eyed River up. I was on full but calm alert just waiting for any sign of a move towards River. I would have been straight out there if he'd done anything but Flash just watched her for a few minutes before slinking of over the back wall.