I've just spotted the lighter Naughty Twin creeping up the back garden. I saw her through the bedroom window so I ran downstairs to see if she wanted to speak to me.
River got there first and stuck her head right out my back door window. She barked at her a bit but it just made the lighter Naughty Twin move closer, sniffing the air. I know these two are friends so I was curious to see what was going on. 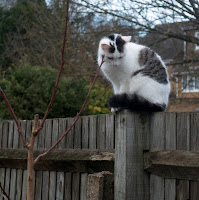 For a little while they just seemed to have a stare out, River whimpering.

The excitement over took her and she squeezed her little body through MY WINDOW. Tut. Still I knew what was going on. I'd spotted Sarah on the back shed watching everything.

Us cats aren't always known for our sense of humour but believe me we've got it. We've just got our in jokes. Teasing dogs is definitely one of them.

Now don't get me wrong, we've just been through a whole bullying escapade and we really don't condone anything along those lines but to wind up a dog can really be fun. They do the same to us, we understand each other. But the thing is we've both got entirely different senses of humour. We know the other is doing it but we don't find there's in the slightest bit funny, nor do they ours. We just cannot see what they find so funny in their little games even though we know they think it's hysterical.

This however was our little game - Cat Fun Time.

I could see River was bursting to play and as I said before I know they've got quiet a nice little friendship going on so no malice was in play here. The lighter Naughty Twin was sitting dead still as if saying to River come get me. River was hesitant, she's used to me being a bit leave me aloneish and she's not got an awful amount of other cat company time under her belt.

River finally decided OK here I come steam building and just at the moment she moved forward the lighter Naughty Twin jumped clean up on the fence. Us cats are fabulous jumpers. No one can beat us.

I could see River wished she would come down and made a terrible barking noise but she wouldn't. She just sat at the top looking at her.

Sarah was up the back cracking up. They were having so much fun. River was enjoying it in her own way as well. She so desperately wanted to just play Rabbit Hop of whatever some of those crazy games she plays is called. 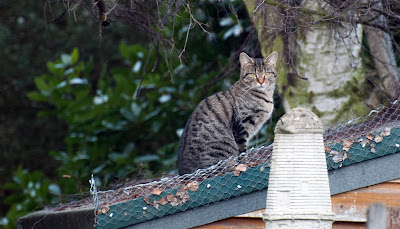 I followed River out the front. Stay Daddy could see what was going on as he saw what I did.

George was sitting waiting out the front for his turn. They were all on in it. River spotted him out of the front window and went mental. She was in a I wanna play frenzy.

George played his role like a cracker and just stared blankly back at her.

That eye is getting worse!

Daddy called to River and gave her a little cuddle and stroke. He could see she was about to have a fit and Disappears is sleeping. 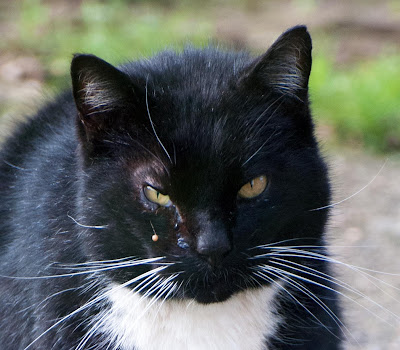 Cats and Dogs - The Other Side
www.riverssong.net/2013/02/i-dont-know-what-game-this-is-called.html