Well That Was Awkward

Mogsie is back up by the Swinging Heart of Love again.

A part of me just wanted to pretend that I didn't see him but I'd already gone outside when I saw him so he definitely saw me. Ignoring things would only make it worse so I decide to call out from where I was. I needed to know what happened last night.

He said that George and Bella had taken it in turns to watch the spot that we said the food storage was going to be in and it was a no show.

Phew at least that's sorted then Spit didn't say anything to the rest of The New Cat Crew. It very much looks like he was telling the truth then. 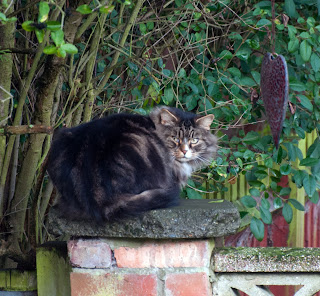 I told him about my thoughts about Doublay also wanting to leave the group. The thing is we now don't really have that much time to set the same trap for a second time. Even if we did would we be able to pull the same trick off twice?

It was a conundrum we were in.

He said he'd think about what to do about Doublay but tonight was most certainly on for setting up the rest of the gang and Foxy. The birds and Squirrel Tree had already been told it was a go and were spreading the word as we spoke to entice Foxy Lectar. It was too late to stop it so it's going ahead!

That dealt with the conversation then became stiff. I didn't know what to say and I got the feeling Mogsie felt the same.

I wanted to ask him how things were with him and the lighter Naughty Twin but to be honest I also didn't want to know. I went to say something but nice weather today came out of my mouth.

We then fell into silence just looking at each other not saying anything.

I'd better get back in, I said and with that I ran off.

Well that was awkward.