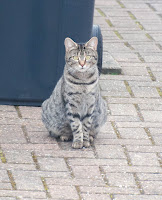 Sarah finally managed to catch up with Emma and asked her if she would like to come over with her to mine in the next couple of days to have a little chat and catch up.

The response wasn't quiet what was expected. Sarah said that she thanked her but just wanted to be left on her own. With that, Sarah said, she ran over to the post and had a mad scratching session before running of over the back gardens.
Um that doesn't sound like she's exactly that relaxed even though us cats do need to do that to manicure ourselves. Oh well we tried.

Sarah then asked if I was free now as she didn't have anything planned. As lovely as that would have been George was sitting out the back and if we were to have a bit of a gossip there's very little point doing it when the person in question is within a stones throw so we are going to catch up in the next couple of days. I'm so looking forward to Sarah's take on George, she knows him so much better than I do.