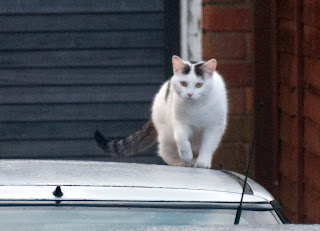 The lighter Naughty Twin and I have had a chat and cleared the air. I wasn't really aware that there was a problem between us but there's obviously been some awkwardness around involving between her, George, Mogsie and I. 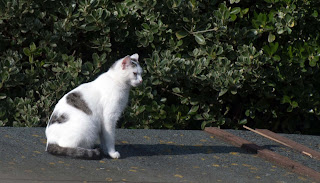 The sun's been shining and she was enjoying time playing on the garage roof and cars. I was watching her from the front window and when she looked over her I smiled at her. For a second or two she paused and then started to make her way over here, walking around the side and straight out to the sunshine shed.
She looked over towards me a couple of times and so I went out into the back garden and called out a hello, how are things?

She looked like she wanted to talk but didn't say anything. Well I'm older and I guess it's up to me to take the lead.

Things seem to be a bit difficult how you doing?

Well that opened the floodgates and everything came out. How she didn't mean for everyone to be arguing, how she feels bad especially that Mogsie and George have been fighting, how she doesn't understand why she's been doing what she's been doing,  how lots of people have been having a go at her. Oh the poor thing she really did seem distraught.

We sat and chatted for ages and I let her know that I had no problem with her. I did tell her that I'd been having mixed feelings about George and Mogsie but that at that moment George and I are quiet happy just hanging out with each other and getting to know each other.

I think she's feeling a bit better now. Poor thing, Spring's here and hormones are going wild. It's hard enough for me someone who's been through it many times before and she's just starting out. Boy it brought back so many memories about Charlie and the girls dad and how that situation really wasn't an easy one for me to understand and cope with at the time

At least she now knows she's got someone other than Sarah to talk to about these sort of things and we've cleared the air.