Our Own Little Secret

The lighter Naughty Twin dropped by this afternoon to keep me updated about her treasures hunt. 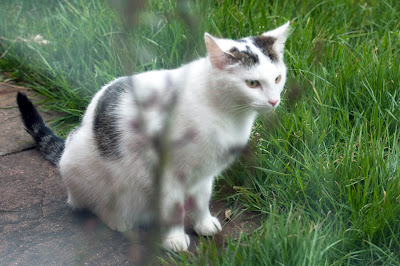 It's only us two in Catworld that know that there's buried treasures and she asked me to keep it to myself, our own little secret. Oh I liked the sound of that a secret that just the two of us share it made me smile that she trusted me enough to let me join in.

I asked her how it had been going and she said that nothing so far but that she was going to continue. She must like a mystery as much as I do.

I asked if there was anything that I could do and she suggested that I search my garden around the place of any holes that Foxy had created. I then asked if she knew what had gone on between Mogsie and George this morning but she said that she had been busy with her hunt all day so had no idea and with that she was off.

Foxes like us cats have very good senses of smell so if he didn't know where it was then it could only be one of two things.

One - he buried it and forgot. Now this one I don't think the most likely as Foxes are cunning and sly but they are not known for poor memory or...

Two - he didn't bury it and therefore it's some other sort of treasure that has been buried by another. That makes it even more exciting. Tomorrow I begin my search.