What It's All Been About

Finally I got to find out what it's all been about.

I heard River doing some whinging downstairs and followed daddy to find out what she was moaning about. There on the front door waiting by our door was George. I couldn't get out that way River was blocking the route so I went out the back way and called out to him. Daddy was keeping River occupied by hiding some treats in her toys so I knew we'd be OK talking out the back. 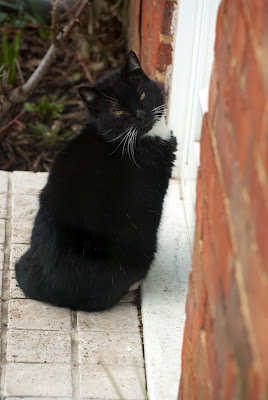 It all started on Sunday when George said that he was coming over to see how I was and mentioned this to the lighter Naughty Twin. He said she seemed upset by this but he didn't understand why and was just talking to her to see if he could get to the bottom of her sadness when Mogsie came over.

At that point she rubbed her check against his and Mogsie thought that it was him that had upset her and had a go at him. I guess he was only trying to defend her but George said that he really didn't want to get into things with Mogsie. He'd did his usual think and stuck his tongue out at Mogsie. Hindsight he said was a good thing and he wished he hadn't but he just wasn't in the mood to get into things with him. As we know they've had a difficult relationship at times.

Well Mogsie accused him of upsetting the lighter Naughty Twin and then George said he accused Mogsie of mucking me about and Mogsie said that the same could be levelled at him. The lighter Naughty Twin was then caught by George smiling at these two men fighting over her and George turned to her and told her to stop playing games.

Mogsie being the gentleman that he is then told George to stop taking things out on her and it all descended into a right ruckus and ended up with no one talking to each other.

I didn't quite know what to say to me it was obvious what was going on but then again I'm a step removed from it so maybe that's why it was clearer.

Do you think she's trying to play you both off against each other? I asked

He just looked at me I guess he was trying to work out if that was the case or not. At that point River came running out and we both went running off in opposite directions.

At least it's given him some food for thought.