As One Mystery Is Solved Another Begins

This whole idea of there being buried treasures around here has quiet intrigued me and as I saw the lighter Naughty Twin out again early this morning I took the opportunity to go and ask for some more details.

That's why Foxy has been coming around here, she explained. 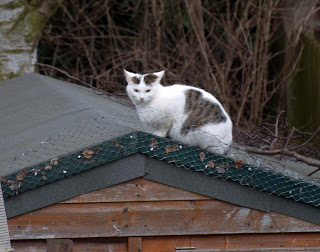 Although I hadn't seen him the Ginger cat came through Catworld yesterday. He'd heard that Foxy was back and wanted to see how things were over here as he'd also made a terrible mess over in his area, holes everywhere.

Now he had heard through the grapevine that Foxy wasn't just back to teach us all a lesson, that he could come and go as he wanted, but that there was an ulterior motive - the buried treasures. I'm guessing the men digging up the road again must have made him nervous that they had also heard about it and were searching.

No one knew what the buried treasures were just that he was desperate to get it.  Ah so as one mystery is solved another begins.