Well I've been fully filled in by both River and daddy about where they've been this weekend, up to see WHS and A in their new home in Yorkshire. He said it's in the middle of something called the Haddock Triangle, sounds intriguing and tasty.

Apparently daddy said River was good and didn't mess up their house too much. But on to more important news they are still considering getting a cat.  Sterling idea I think, I don't know why they've not done it already but I guess it's all about circumstances and the right time.

He said they've got a lovely house and that it's all very different to where we live. A man called Titus who owned a mill built the whole area as houses for his staff to live in back in the olden days. He even built a school for the children so that they didn't have to go to work up chimneys and places like that. He sounds a very nice man to me. I'm sure he must have been a cat lover too he sounds the type.

He did say it was very cold but they got out and about and showed me this photo he took of a calendar all about local cats that was being sold in a shop. Well it seems they've got their head screwed properly on up there why hasn't this been thought about before?

He didn't buy it he said as a third of the year has already gone. Tut, that's not really the point but hey ho it's lovely to have them home I did so miss his cuddles and he looked so pleased to see me. It's been ages since they went on holiday so I guess I don't begrudge them a day or two away holidays aren't really my type of thing. 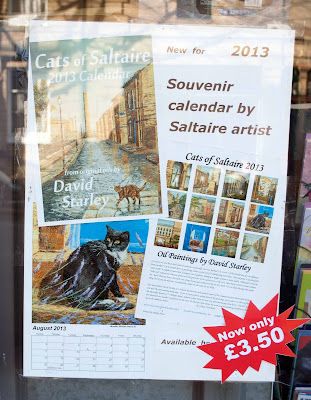