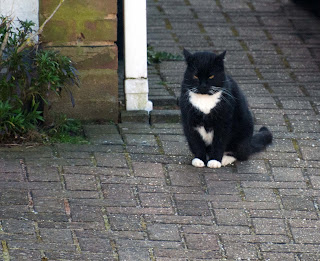 It appears an uneasy truce between Mogsie and George has been formed although relations are still very strained.

Mogsie came back on his own from his little escapade with the lighter Naughty Twin and decided to play wind up the cars. He didn't make any move to come over here so I just settled watching everything going on. 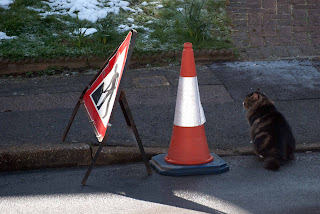 I'm back up in the office but am keeping a little bit away from Stay as he keeps on sneezing and one hit me. Not very nice I know but he obviously needs my catty love so I'm not going to hold that against him.

George came around the corner and settled on the pathway giving Mogsie some stern looks but at least he didn't go to confront him. Mogsie pretended not to see him but I could see he was watching him from the corner of his eyes.

Oh well I suppose you can't hope for miracles that everyone is going to make up but then again these two have never really been friends so you can only work with what you've got to begin with. At least there's no scrapping going on.
at 13:03