Well it's all action here this morning. 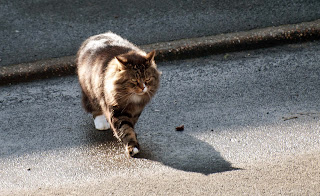 Not ten minutes after I saw Sarah and the lighter Naughty Twin playing on the snow Mogsie appeared from around the back of his house.
He had a determined look on his face, looking first of all right up into our office and then striding purposefully across the road heading in this direction.

I'm not stupid I could tell he wanted to speak to me so I ran downstairs to see what he wanted. Having a little scan around to make sure the coast was clear which it was River was playing in the garden I jumped up in the window waiting for him to arrive.
Half way across the road I saw him turn towards E's and I followed his line of sight. The lighter Naughty Twin had called out to him he stopped, turned and paused. He didn't look like he knew whether to go to her or continue on his way over here a passing car helped him make his choice as it sped down the road and with bare a second to spare he ran over to her and they ran off together.

I wonder what Mogsie wants? 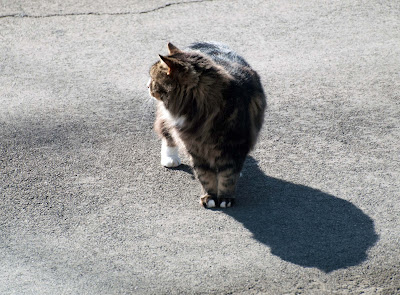