Daddy fell asleep on the sofa last night and so I joined him to keep him company and to keep him warm it's so cold here at the moment. 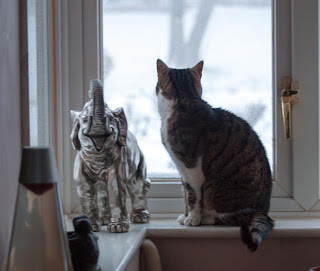 Disappears fly is still stuck with him and it's giving him the sweats at the moment so both daddies are doing their up most to keep away from each other Stay is desperate not to catch the fly as well.

Last night we went to sleep with snow falling this morning we woke to a blizzard. Wow it's so beautiful but obviously dangerous as well for those out in it. 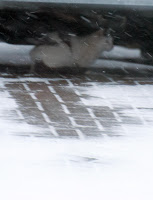 I've joined daddy in the window watching the people driving up the road in their cars. I' can't understand why people are doing that we live on a hill and the wheels of the cars are spinning like millions and millions and getting nowhere and there's looks of sheer terror on their faces.

Daddy has a hard and fast rule it snows and the car stays exactly where it is.

The lighter Naughty Twin obviously doesn't agree I've just seen her run so so fast across the road right under R's car. Us cats however have a lightness of foot and fantastic claws so we don't slip or slide no matter the snow.