He Turns Up On My Doorstep

Oh lovely just as I thought George may have been keeping his distance from me he turns up on my doorstep.

I was downstairs having been expelled from the office for jumping all over daddies lap as he was trying to work. Well I suppose I can understand he does try to get his work down as early as he can these days and what with Disappears going out very early this morning he took the chance after walking River to get right to it. 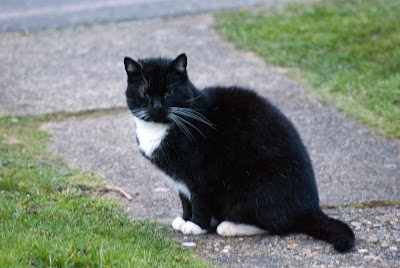 How are you? He mouthed through the closed window. Luckily us cats can lip read so I mouthed back that I was fine and asked how he was and what had he been up to.

Not much, he said, just taking it easy and hanging out with Mogsie.

Oh so that's what was happening yesterday, they weren't about to have a big punch up they were settling their differences. This of course is very good news to my ears I hate it when two people fall out and there battles have been legendary around here.

He asked if I was coming out later and I smiled and nodded that I would be just before River came running in from the back garden with a stone in her mouth which she dropped as she bounded over to me. Of course I made a quick exit.