Foxy Lectar AND Silver Eyes Are Back 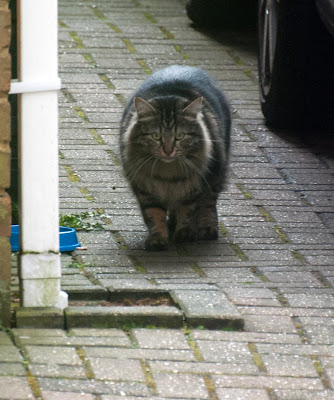 Finally I've found out what all the fuss in Catworld today was about.

After this mornings activity things have been pretty quiet all day. Daddy worked and then went on a big move around and tidy up so I kept out of his way up, falling asleep up in the office. I came down when it sounded like he had finished and I could see River outside playing so I knew the coast was clear.

Blow me but within a couple of minutes the darker Naughty Twin came running down the road. Luckily daddy had got himself into a bit of a sweat earlier and the window was open so I called over to him asking what was going on.

Without stopping he called back that both Foxy Lectar AND Silver Eyes had been spotted lurking around last night and there's holes everywhere.

I didn't have a clue there's no holes or damage over here.

By the time I'd digested what he had said he had gone but following just a minute behind him was a very angry and determined looking Mogsie. He didn't look over here at me and I didn't call to him he didn't look in the mood.

So he's come with reinforcements has he. Oh dear whatever next! 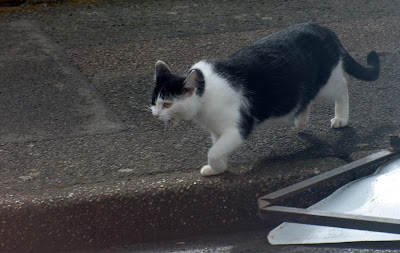