It Was Under My Nose The Whole Time

It was under my nose the whole time I've only just seen all the junk that Rivers been littering the place with this week.

There's a couple of stones and a bit of a brick, heaven only knows why some weeds and a bit off one of daddies favourite pots and she's desecrated his lightly up rainbow flower thing. But there more importantly under my eyes the whole time was the answer, the key!

Yes the keys, well not exactly the keys but the shiny treasure next to them, River must have found it earlier on in the week and I've been so busy looking outside I didn't realise she'd already discovered it.

But who can L be I don't know anyone who's initial is L and why are his set of keys buried in our back garden? As one mystery is solved another begins! 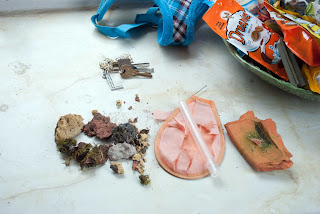 Cats and Dogs - The Other Side
www.riverssong.net/2013/03/my-treasures.html