Now this is much more like it a cat taking control of the budget.

Daddy has just shown me a photo on his computer of a cat called Freya and she's in something called the Budget Box.

Now this budget box is an old briefcase type case that is used to hold all the papers that daddy says will let us know how much we are going to be ripped off with this time. It's a very old box and a very old system of as daddy says, bleeding you dry.

Finally someone in charge though has seen sense and is leaving these type of decisions to a cat. Cats as we know are very clever and have a much better grasp on the economy than those humans that pretend they do. Have you ever known a cat in debt? No thought not!

Daddy says it doesn't matter who is in charge basically they are all the same so it's genius to pass the job over to those who actually do have a better grasp of what's important. Now that's what I call a clever well thought out decision, finally.

See they can make them if they use their brains. First on the agenda with me, crapping all over the rubbish words they've written and start from scratch.

It seems Freya has come to the same conclusion. 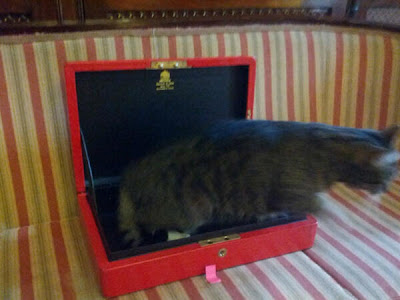